The catalogue number suggests otherwise, but Peng Sound Records are indeed presenting their 10th vinyl release, roughly four years after the incendiary ‘Find Jah Way’ kicked things off in all the way back in 2012… Many thought that the world would end that year, but, things really got going for Peng Sound from there on in, moving from the occasional music events in the Take Five Cafe to fully-fledged DIY record label.

The latest incarnation on the label, is the unearthing of ‘Counter Attack’ –
Full pressure, past-midnight soundsystem gear, built by Digistep and Stryda, firing from all angles as soon as the Piano intro-lead gives way to the momentous bass and drum parts –
these steppers cuts have acted as crucial dubplate weaponry for Iration Steppas, Gorgon, Dubkasm over the years… The first time this dubplate got played, was at Zion Station Festival, in Italy during a three way sound session between Dubkasm, Vibronics and Young Warrior.

And those of you who made it to the session, or got a copy of the cassette recordings that were issued on the label later that year, will probably also remember hearing this one getting played at the first Teachings In Dub & Peng Sound dance at the Trinity Centre in January 2015, where Counter Attack set the dance alight with soundsystem pressure. It was for this occasion, that Gorgon Sound had got hold of the stems and restyled ‘Counter Attack’ in their own inimitable way –
The Gorgon Sound remix comes locked with an extra fluid low-end melody, crushing it’s way through the first 3 mins, before stripping things down to a heavy dubwise section for the last part of the tune, with a propulsive bassline that is fittingly only a few notes away from the first ever record that brought Gorgon and Dubkasm together – Find Jah Way.

You can order the vinyl here – LINK

Terrace Martin is a notable musician, rapper and producer from the city of Los Angeles and from the beginning of his career he has lent his skills to artists such as Kendrick Lamar, Quincy Jones, Snoop Dogg, 9th Wonder, Talib Kweli and many, many others.
Shattering the acknowledged rules of hip-hop production, he samples everything from funk to jazz to classical to create fresh and original tracks. His productions have made him one of the most sought after producers from the streets of Los Angeles to across the country. His father was a jazz musician, while his mother was a gospel singer, destining him for a life in music.
“I grew up in the middle with only hip-hop,” Martin says. “My parents taught me that there’s only good and bad music.” He began playing the piano at the age of six and at age 13, a friend encouraged Terrace to take up the saxophone and he did, finding one for $150 and learning to play it by himself. His Godfather Stemz Hunter, also a saxophonist, suggested Terrace enroll at Santa Monica High School to sharpen his musical chops. He walked in not knowing what a scale was and soon found himself practicing up to seven hours a day.
Martin made a decision to transfer to Locke High, an LAUSD school with a tough reputation within an earshot of gang-ridden Watts where the artistically-inclined gravitated. While attending Locke High, under the auspice of Reggie Andrews, Martin became first chair of the All-State jazz band.
As a child prodigy, Martin gained the interest of talk show host Jay Len who provided a $30,000 scholarship and purchased Martin’s first professional saxophone. Fresh out of high school, Martin attended Cal Arts but decided school was not for him and opted, instead, to go professional. Martin was not only recognized by Hollywood and music industry elites, he also found favor in the jazz world where world-renowned jazz musician, Billy Higgins made Martin a member of his World Stage All-Stars playing in the historic Leimert Park. From World Stage, Martin began touring with Puff Daddy and God’s Property, presented by Kirk Franklin.
“I didn’t believe in suffering to play, like why do musicians gotta suffer to play? Eating Top Ramen isn’t cool. I wanted to be main stream.” With that mentality guiding him, Terrace worked hard to get his beats placed for major artists’ albums. He scored a minor hit with 213’s “Joystick,” and went on to land beats on the Doggfather’s “Rhythm and Gangsta: The Masterpiece” and “Ego Trippin” albums.
Martin came from behind the board when he released his first project, The Demo and since has released a number of critically acclaimed masterpieces.
Martin’s projects feature many guest appearances from the peers and mentors he has worked with who have lent their expertise to encourage the budding artist’s career. That includes verses and production from the likes of Snoop Dogg, Kendrick Lamar, Wiz Khalifa, Pete Rock, DJ Quik, Kurupt, and plenty of others. In late 2010, Terrace Martin and radio personality Devi Dev released the EP “Here, My Dear”, inspired by Marvin Gaye’s critically acclaimed 1978 album of the same name. The EP has appearances from Snoop Dogg, Charlie Wilson, Kurupt, Problem, Kendrick Lamar and pianist Kenneth Crouch.

In 2010, he executive-produced Kurupt’s “Streetlights” album and formed a group called Melrose with LA underground rap hero Murs that put out a self-titled album in early 2011. In 2012, Martin released a number of highly regarded projects, and in 2013 he graced the airwaves with his first highly anticipated independent release, 3 Chord Fold, a fusion project that brings together some of music’s best, hitting fans with a vibe reminiscent of his 2009 release Hear, My Dear. 3ChordFold: Remixed was subsequently released at the end of 2013 and the three chords were completed with the release of 3ChordFold: Pulse in Spring 2014, which featured many live performances with guest appearances by Robert Glasper, Thundercat and more. Pulse also included new original tracks. Expect his latest project, Velvet Portraits to be released later in 2015.

While spending time with numerous luminaries in the studio, Terrace is one of the few artists in hip-hop who seamlessly works with underground, emerging and established artists; often on the same song. And it’s something he’s proud of. “To me, I just bridge the dope people with the dope people,” says Martin. His position in hip-hop music is unbridled, but it is his jazz musicianship that separates his sound from his peers.

Terrace Martin is currently a staff producer for legendary Quincy Jones, Snoop Dogg, Wiz Khalifa, Top Dawg Entertainment (Kendrick Lamar and Schoolboy Q) where he has lent his talents heavily to the critically acclaimed and highly anticipated To Pimp A Butterfly. He works closely with DJ Mustard and YG and continues to work closely with his mentor, Dr. Dre. Terrace can also be found performing with his live band for his growing fan base.

Terrace Martin took the stage on January 31 for our fourth Sunday Sessions presented in conjunction with MoMA PS1. The event featured a conversation with Terrace moderated by Meghan Stabile of Revive Music, and a performance by Terrace and his live band We’ve taken bits from that discussion, done a follow-up phone interview, and added highlights from Terrace’s performance to produce 45 minutes of illuminating conversation punctuated by music. Topics of discussion include Terrace’s formative influences, the relationship between jazz and hip hop, the climate of music in Los Angeles, and his work with Kendrick Lamar.

Natural is the latest collaboration between musical travellers and kindred spirits Nicola Conte and Stefania Dipierro, the culmination of a relationship rooted in a shared belief in the spiritually healing powers of music. The Italian duo is set to take 2016 by storm with a sensual, sumptuous and highly accomplished record, firmly anchored in the traditions of Brazilian bossa nova, samba and jazz.

Stefania and Nicola first came together as members of the seminal 90s musical collective Fez, with Nicola leading the group. This period, one full of inspiration and discovery, laid the seeds for Natural. Though Stefania lent her enviable vocal talents to many bands over the years and Nicola went on to an illustrious production career, outside of a handful of tracks from Nicola’s album Jet Sounds, it was not until now that the stars aligned again, allowing these two mercurial talents to merge their musical sensibilities once again to access the deep spirituality that is at the core of their approach to sound. Stefania’s ongoing musical journey has ensured that her connection to, and understanding of jazz runs deep, as she resoundingly demonstrates throughout Natural. With Nicola once again in the production seat, the album serves as the defining showcase for her inimitable vocal talents.

Nicola first achieved international acclaim for his signature style of samba-influenced acid-jazz, which also drew inspiration from 60s and 70s Italian film soundtracks. Alongside his production work Nicola has laid out his musical vision through his guitar playing and songwriting, with numerous studio albums including 2004’s Other Directions, released on Schema, a French Subsidiary of Blue Note Records. His compilation series Viagem, all 5 volumes of which have been released on Far Out, provide an insight into the sounds of the past that have inspired his music of today, a peerless collection of lost bossa and samba jazz from the swinging Brazilian 60s.

On this new collaborative release for Far Out, Conte’s forward thinking production cleverly compliments and contrasts with the warmth of Dipierro’s laid back inflection and gloriously rich timbres. Natural is aptly named, considering the ease with which Stefania and Nicola have re-assumed the roles of muse to one another, a musical relationship providing the deepest access to the poetry within their sound. The album’s title track and first single is a perfect introduction to their world, a masterful blend of global influences in which a propulsive Afro-rhythm bolstered by a searing funk guitar, whilst soothing Rhodes chords provide a distinctly Brazilian warmth and Stefania’s vocals offer up an enriching melody to soothe the heart and engage the mind. Alongside original compositions from Nicola and others, Natural also tantalisingly promises some inspired re-interpretations of classic Brazilian and jazz pieces: Trio Tenura’s exemplary bossa groove A Gira and Steve Kuhn’s beautiful The Meaning of Love are among the tracks respectfully imbued with an updated resonance. The scintillating blend of jazz and bossa alongside a contemporary sensibility makes for a debut collaboration. A timeless example of the special places Brazilian music can go with a beautiful voice and a smooth groove, marking out Dipierro as a natural talent of the highest order. 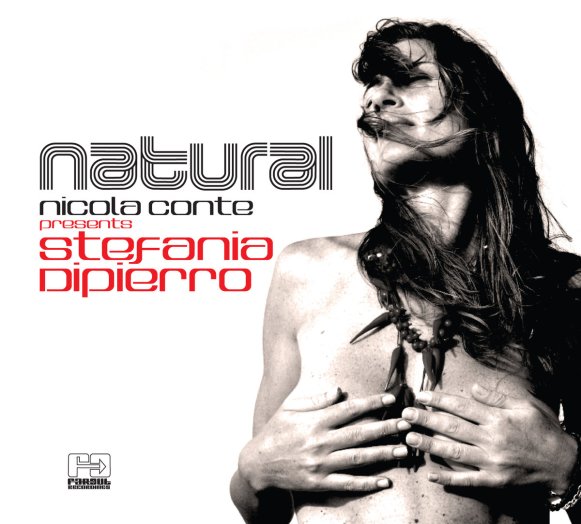